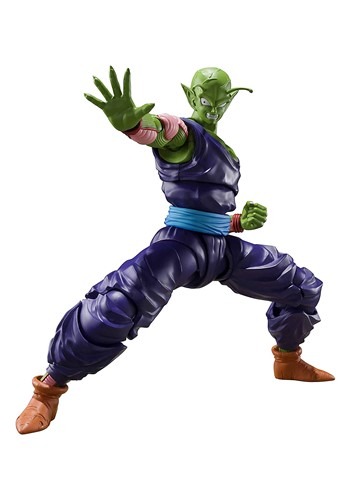 Piccolo has mastered many special moves during his tenure as one of the Z Fighters. He can toss Light Grenades at foes like Cell. He perfected the Masenko and then he even taught it to Gohan. He can also regenerate lost limbs and make exact clones of himself during battle. And then, of course, there's his piece de resistance, the Special Beam Cannon. Well, the Namekian fighter has been working on one more technique to add to his repertoire, the Special Beam Collectible. It's when he stands completely still in his Special Beam Cannon pose, while making your Dragon Ball Z look awesome!

This Dragon Ball Z Piccolo "The Proud Namekian" Action Figure is a collectible figure from SH Figuarts. It has realistic molding and stands 6.5" tall. He comes with a variety of alternate parts, including additional hands, his cape and turban, and plenty more. He features 20 points of articulation, so you can pose him in a wide variety of action poses based on the anime series. We recommend using him with a display stand (sold separately) to make sure he can do all of his iconic poses from the classic Akira Toriyama anime series.