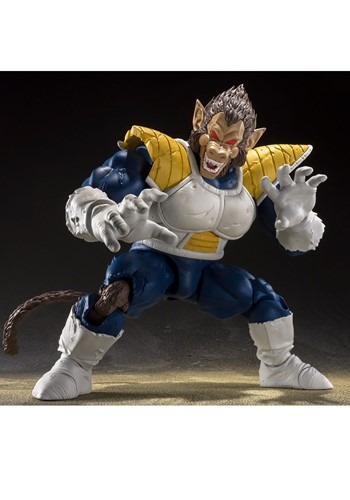 Everyone likes to slam on Yajirobe. Some people even make fun of him more than Yamcha. Put yourself in Yajirobe's sandals for a moment. Take a look at Great Ape Vegeta for a moment. He's big. He's hairy. He's mean. He's just whooped Goku, the greatest warrior on the planet and now, the Z-Fighter B-team is desperately trying to fend him off. You? You're not even part of the B-team. You're more like... the Hang-Out-On-Korin-Tower-and-Hope-the-Fighting-Ends-Soon Team. You haven't been in a real fight in years. Are you going to jump in try to fight Vegeta? That's a big nope.

But, Yajirobe did what he could. He crept up behind him and sliced off his tail, reverting him back to normal Vegeta, so the rest of the Dragon Ball Z fighters could stand a chance. It might not have been much, but that single move probably saved the day. And now, that moment is immortalized in this Dragon Ball Z Great Ape Vegeta Figuarts Action Figure!

Make no mistake, the focus of this figure is Vegeta. The figure artfully recreates his look during the battle on Earth when he transforms into a Saiyan Great Ape. He stands 12 inches tall and comes with 20 points of articulation. He also comes with interchangeable hands, one of which includes him crushing Goku! But, our favorite part about this figure is that it comes with a small Yajirobe figure, which you can use to pose this figure in the classic and rare scene that Yajirobe does something useful.