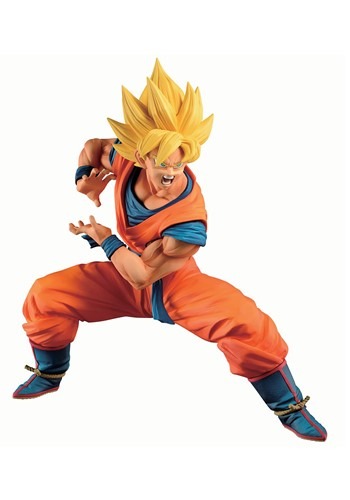 You've seen this stance before. Starting with the eighth episode of Dragon Ball, Goku learned the Kamehameha by watching Master Roshi perform it just once! Decades passed and Goku perfected the technique and used it to pummel baddies across the Earth... and across the universe. And... if you're anything like us, you've been secretly trying to master the technique by mimicking the movements from the anime series. (We still haven't been able to shoot an energy beam from our hands, but we're still hopeful).

Inspired by Akira Toriyama's most famous character, this Dragon Ball Super Saiyan Goku Ichiban Figure is an officially licensed figure from Bandai. It comes in 2 pieces and snaps together to form a 7-inch tall figure. The detailing is astounding and has realistic texturing and wrinkles on Goku's clothing. His muscles are also perfectly sculpted, so he looks like he jumped right out of a scene from the anime. He'll be the centerpiece to any Dragon Ball Z collection.