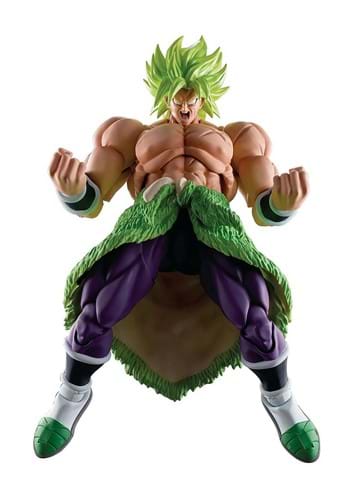 Okay, we have a theory. It might sound a little kooky but bear with us. We think there is a more significant reason why Broly is so stinking strong. As Dragon Ball Super anime has shown us, where an elder Namakian resides, there is also a chance they created their version of the Dragon Balls. We think that long before the story of Dragon Ball Z takes place, there was likely a Namekian who secretly lived on the planet. We believe that Broly's father, Paragus, somehow was able to get his hands on the Dragon Balls and wished for his son to be the legendary Saiyan. Okay, that might be a little head-canon, as the Dragon Ball Super: Broly explained his origins pretty well, but it would (kind of) explain his glowy green-haired ultimate form. This version of Broly is quite different from his counterpart from DBZ. He has a way more sympathetic backstory and has a complete character arch. The officially licensed anime action figure shows this new version of the classic villain. This Broly action figure is officially licensed and comes packaged in a clear window box—a must-have for collectors who want to keep the highly detailed figure intact. If you are a DBS and Broly fan, you will power up for this Dragon Ball Super: Broly - Super Saiyan Broly Full Power S.H. Figuarts Action Figure.