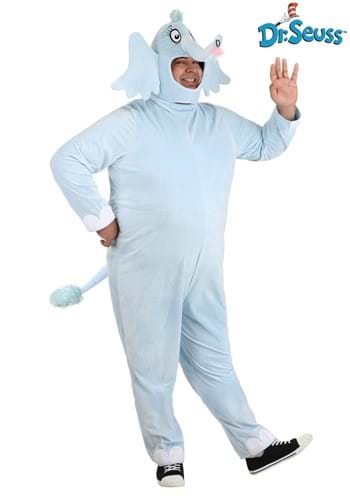 How often have you heard an elephant screaming its trunk off trying to get attention? Not too often! Now that's for a few reasons. First off, they're generally pretty quiet creatures. They're often content to wander around their territory, enjoying their day and taking it easy. And, of course, when they do have something to say, that trumpeting sound they offer doesn't require much repetition. One blare is usually enough to let the entire jungle know that you've got an opinion and it's time for them to listen up! Of course, it isn't usually the same for the miniature Whos that dwell on the free-floating spec of dust. Fortunately, they won't need to yopp it up, either, when they have you to speak for them!

Become the voice for an entire group of Who's-Who of Who-ville when you yopp into this officially licensed Dr. Seuss Plus Size Horton costume! Bring the iconic elephant to life with a gray-blue jumpsuit that features a fuzzy tuft at the end of your tail that matches the puffy fuzz on the top of your Horton headpiece! It features an open face for easy visibility while still including the big eyes and even-bigger ears of your favorite Who-Protector. The stuffed trunk has an attached bit of pink fluff for the flower... though you may need to convince everyone else that there is, in fact, a whole planet of Whos hiding there!