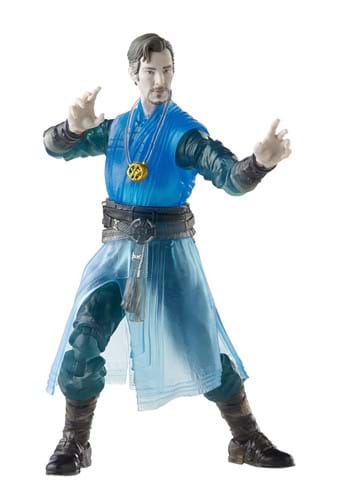 It comes as no surprise that Dr. Stephen Strange is a weird guy. Besides it being in his name, the good doctor had to pick up a few quirky habits being the Sorcerer Supreme. One is the food he consumes. Due to the mystical nature of the energies he channels, he actually can't sustain himself on ordinary people food. In the comics, he's been served slugs, grubs, and other unmentionable delicacies. Pretty gross, right? Luckily you can't smell anything in the Astral Plane. This officially licensed Marvel Legends action figure shows Dr. Strange's surreal astral form. The molded translucent plastic in his robe really adds attention to detail. With multiple points of articulation, you'll feel like the Sorcerer Supreme. If you really want to get into character, you'll have a magical blast with the alternative hands and accessories that come with this Marvel Toy. If you are a fan of the hit Dr. Strange sequel, we know you will sling ring to get your hands on this Doctor Strange in the Multiverse of Madness Marvel Legends Astral Form 6-Inch Action Figure.