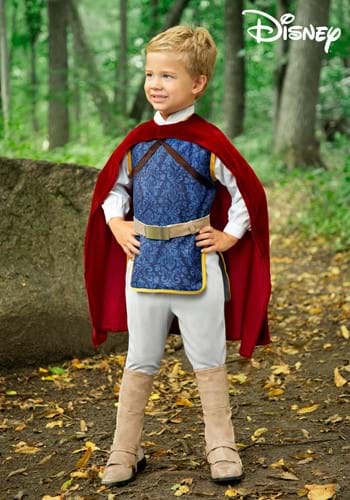 Growing up it bothered you that Disney's Snow White’s Prince didn’t have a name. As a parent you totally get it! Picking a name was hard. And while the name you selected is perfect, whenever you think about the list of names you chose from and the possible ways to describe them now, you find yourself a little torn.

Then again, Prince Smarty Pants isn’t the best way to title a royal, even if they do have quick responses for everything. Prince Chaos feels a little too heavy for a toddler too. Though that name would be entirely accurate—we all know what a tiny tot’s room and daily routine looks like. Prince Charming could work, but of course, that’s already taken and if one thing is certain, your prince is an original.

Embrace your little prince for the character they are growing to be with our exclusive Toddler Snow White Prince Costume from Disney’s Snow White and the Seven Dwarfs. The billowy sleeved shirt and elastic waistband pants let your energetic tot continue to romp around while keeping the household on their toes.

With the blue tunic pulled over the shirt and belted into place, they can prove they’re as sharp as a whip by explaining the print is damask. And when they drape the cape around their shoulders, slip the tan boot covers over their comfy shoes and ride into save playtime, they’ll look the most charming prince in the room!