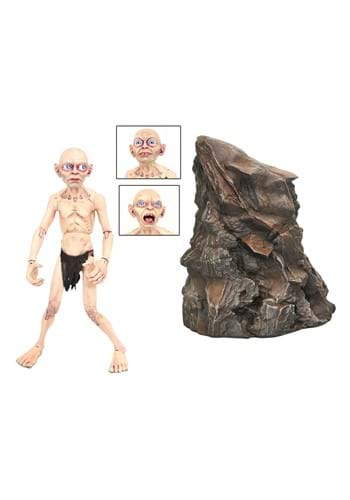 In the quest to keep his precious safe, Smeagol has had to be sneaky. He spent so much time hiding under a roving pack of goblins, that sneaking became pretty natural. Samwise Gamgee isn't really a fan of it, but we are! It seems that Diamond Select Toys were as well, since they decided to craft this sneakily awesome figure of The Lord of the Ring character!

Let this Diamond Select Lord of the Rings Deluxe Gollum Action Figure sneak his way into your collection! The highly-detailed figure is officially licensed and it does a faithful job of recreating the Tolkien character as seen in the Peter Jackson adaptations. The figure is made out of molded plastic and has painted details. The figure also has 16 points of articulation, so you can place him in various poses from the movie. To bring it all together, this figure comes with a rock-shaped stand, making it the perfect display piece.