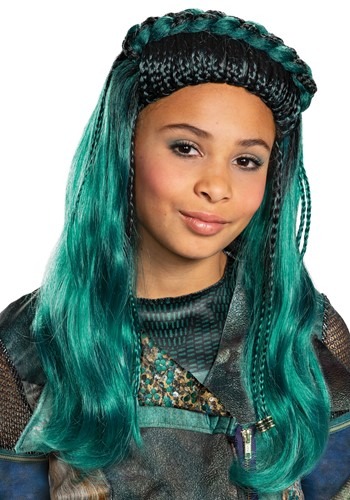 Ursula. The name sends ripples of excitement down the spine of all of us. What majestic wonder she possesses. What powerful magic. What astounding patience, too! How many can watch the years tick by while some self-important merman sits on a coral throne, calling himself king, just because he's got a magical trident?

For a while, we thought that only the sea witch had the stuff to confront "the man" and shake up the status quo. But, then came along her daughter! Uma has inherited the same mystical mojo and has her mother's octopus tentacles, too! But, she even goes a step further. Rather than getting jabbed by ships, she strides atop to captain them instead!

It's time to crown the new queen of the sea! By that, of course, we mean giving your kiddo a crown of sea green and turquoise hair that Uma rocks in Descendants! This mesh wig has shining green hair with a wavy style and Uma's iconic braids down the side and on top. Who needs a crown to be queen when you've got a shining head of green hair!?

Whether captaining the ship or showing off her magic in the sea, Uma is bound to do what Ursula couldn't! We know your kiddo is going to feel all the power while sporting this officially licensed Uma wig, too!