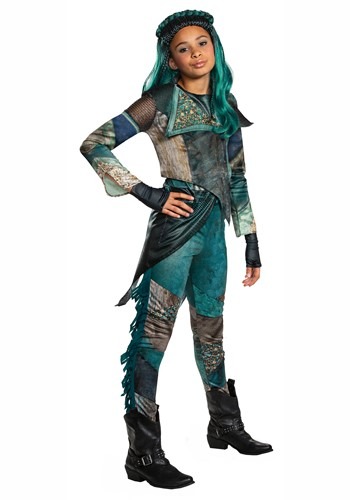 Ever since Ursula first floated her way to Ariel and offered up the little mermaid's every dream for the mere price of her voice, folks have wondered exactly what kind of creature the sea witch may have been. "Does she count as a mermaid?" folks would ask, curious if the lower half of an octopus would change things up a bit too much. It turns out that whole mythologies exist that try to explain just what a half-human, half-octopus hybrid might be!

Turns out that there is a rather fun sounding word: a cecaelia! Cousins to the mermaids, they showed up mostly in Asian and Native American myth, though they never really had a name until modern language-lovers dredged one up from the seas. All of that doesn't matter to Uma, of course. As the daughter of Ursula and one of the last hopes for the rest of the villains to escape the Isle of the Lost, all Uma cares about is using her mystical powers to get what she deserves!

It's time to help Uma break free from the Isle and help your tyke stand out as this epic antagonist character from Descendants. This Deluxe Uma costume provides your kiddo with the look Uma sports in Descendants 3. It is an officially licensed ensemble that includes a turquoise and sea green base with the look of scale armor accents on the knees and fringe on the legs. The jacket has a fishnet mesh and translucent sleeves and outrageous lapels! You'll both love this complex movie look all wrapped up in a fun-to-wear costume.

Your tyke might be curious about activating Uma's cecaelia transformation while wearing this officially licensed costume. Unfortunately, since the origin of the octopus-people is still a bit of a head-scratcher, we're not sure how to make that happen quite yet. Your kiddo can still enjoy singing the Descendants songs in this look until then!