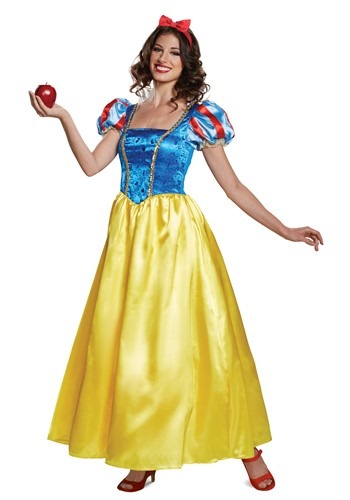 You know what Walt Disney's favorite saying was? "If you're going to live life like a fairy tale, you might as well live it like the biggest tale there is!" Okay, maybe that's not a real quote, but we live by those words here at FUN.com, and in the world of fairy tale characters, you can't get any more vaunted than Snow White.

Even before a magical talking mirror gabbed that Snow White was the fairest one of all, it was probably a safe bet that she was at least in the Top 10. Besides having elegant and classic beauty, Snow is quite the charmer and gets enough beauty sleep for a handful of young women! But, if this lovable lady had one flaw, it's how she could be a little too trusting at times; if there's one saying we wouldn't abide by in this kingdom, it's that one about an apple a day. Sure, she lucked out when the dwarfs who owned the forest cottage she stumbled into happened to fall in love with her, but it could have easily gone another way if that had been the home to seven hungry goblins, instead! And as far as accepting apples from mysterious strangers goes, well... we all know how that ended.

When you're dancing in this glamorous get-up, you'll quickly see what all the fuss was about! Show up to a costume party in this beautiful Deluxe Adult Snow White Costume, and you'll have the look of a true storybook princess! The shimmering satin gown is officially licensed, and designed to replicate Snow's iconic Disney look, so you just need to add some lovely slippers and an optional Snow White wig to complete this magical look! And keep an eye out for old crones handing out fruit. Just don't do it. We'll provide the fruit -- just stop by our offices.