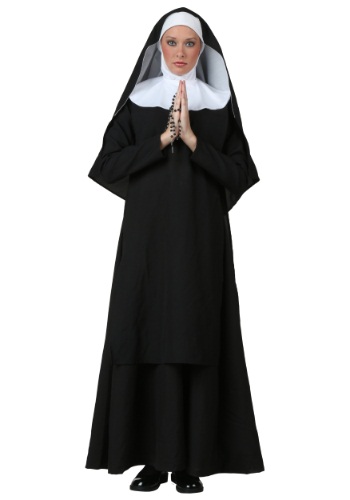 Dressing as a nun is not a bad way to go for Halloween, especially if you're afraid of all the scary monsters you'll see! All of the demons, ghost, ghouls, and spirits won't want to come near you if you're dressed like a nun. After all, all of these creatures don't like anything holy, so theoretically we think dressing as a nun might keep you safe!

Actually, we wouldn't be surprised if they were afraid of you! After all, they'd think you have the power to banish or vanquish them from this world, so to a ghost or a demon, you would probably seem pretty scary! Does that make this nun costume technically a scary costume then, because there are things that are afraid of it? We wouldn't consider it the traditional kind of scary, but we think that in a sense it does make the cut.

When you wear our Deluxe Nun Plus Size Women's Costume, you will be dressed in the classic nun attire that is easily recognizable to humans and ghosts alike! You'll be in an all-black dress, meaning you could move unseen in the night to scare any demons on the prowl on Halloween night. The only white in this costume is the white head cap, the inside of the veil, and your white collar. These three pieces are the only warning that some ghost might have when you are coming to scare them.