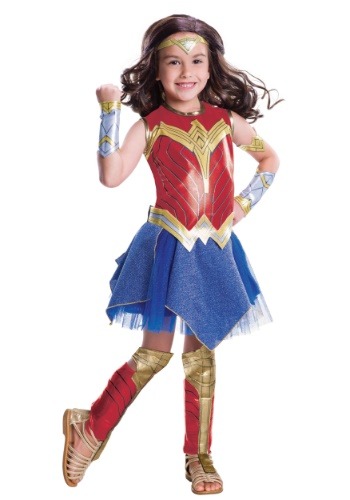 Not only is she among the few superheroes not obligated to being called a girl, Wonder Woman’s origin is among the most fantastic of every hero out there. Here’s your basic recipe for your own Wonder Woman… Begin with a pure soul of an innocent woman and then add mystical clay from a supernatural world of immortals fashioned by their queen. Next, bring down not one, but six Greek gods and goddesses to impart their very best of gifts… strength, wisdom, beauty, speed, flight, courage, as well as boundless determination for sisterhood. Throw in a few godly artifacts and age several years under the guidance of said immortals and then send into the world of mortals thanks to an unexpected dose of independence and you have the perfect woman!

And, it is time for you to mold your own version from your own kiddo with this officially licensed Deluxe Child Dawn of Justice Wonder Woman costume. The sleeveless dress fastens easily with Hook and Loop fastener and the silky based skirt billows out thanks to attractive tulle overlay. A foam headband and belt gives the look Wonder Woman’s iconic imagery and easy fit arm bands and shin guards read your tyke’s armor should they need to confront any of minions of Ares. The look is even officially licensed, so you won’t even be breaking any American laws! Add a shining lasso or any of our exclusive invisible jets and your Wonder Kid will be saving the world in no time!