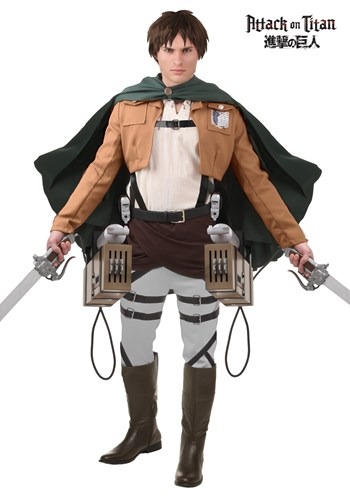 What's an adventurous young kid to do when giant Titans attack his home and kill his mother? Swear vengeance of course.

This is precisely what happened to Eren Yaeger. Of course, merely swearing vengeance wasn't isn't quite enough. After all, he was still just a kid at the time; how's a kid supposed to take on giant monsters? So Eren did the best thing he could do: he joined the Survey Corps in order to explore and get revenge on all those nasty people-stomping Titans. That way he gets plenty of training and even a team to work with! Of course it isn't until later he realizes he's got some super crazy powers that he can use to stomp the Titans back... but we don't want to spoil the good stuff for you.

Of course, if you're looking at this costume you probably already know the good stuff, but that's fine. We'll focus on this awesome Attack on Titan costume instead. Our Deluxe Attack on Titan Eren Yaeger Costume comes with the jacket, shirt, cape, scarf, pants, sash, harness and belt. The shirt has the little bit of a lace-up "V" in the front, the pants are slim fit, and the cropped twill jacket has the Survey Corps logo on it. The cape is hooded, and the harness and belt are faux leather with metal buckles. In short, you'll look so much like Eren Yaeger, we wouldn't be surprised if everyone stopped, stared, and started whispering when you walked by. You know, because of his special skill-set.

Unfortunately the jacket is not available for individual sale.
Answer
Ask a Question
Reviews