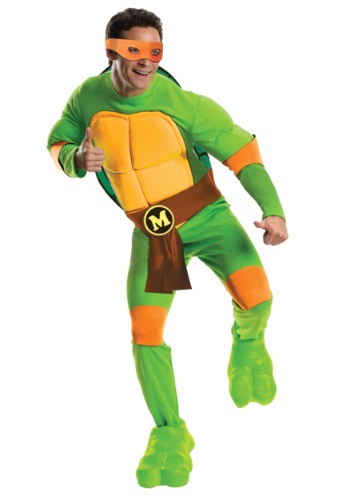 The Teenage Mutant Ninja Turtles, also known as the “world’s most awesome fighting team,” are the unlikeliest heroes in all of history. They started out as a single sketch while creators Eastman and Laird were hanging out watching TV. They were amused by the dumpy, unassuming turtle ninja they cooked up, and used money from a tax refund along with a loan from one of their uncles to self-publish a single comic book. It was meant to be a parody of popular titles 80s comic book titles like Ronin and Daredevil. Flash forward to the present and the turtles have had countless comic books, television shows, movies, product tie-ins, and even a 1990 live rock and roll tour called “Coming Out of their Shells.” (The best thing we ever came up with while watching TV was our idea for a chili restaurant called “Splatters.”)

Our personal favorite turtle will always be Michelangelo. While his brothers were characterized by either leadership, roguishness, or “doing machines,” Mikey was always down with partying, goofing around, and inventing new and unconventional pizza toppings. Even his weapons were somewhat silly, opting for nunchucks, which look more like something you’d make out of glow sticks and bring to a rave than use to pummel your opponents on a battlefield. Mikey’s the turtle for fun guys.

If you’re a Michelangelo at heart too, our officially licensed Deluxe TMNT Michelangelo Costume for Men is the ultimate getup to bring your reptilian hero to life. This eight piece ensemble has everything you need for a party, pizza themed or otherwise. Put on a little green face paint and people won’t be able to tell you two apart!