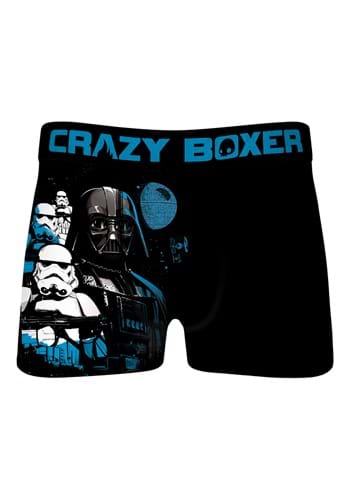 Was the Empire THAT evil? Sure, they were run by Sith, the most notoriously malevolent force in the galaxy. And yes... they probably were a little too trigger happy when it came to destroying entire planets. And yeah, maybe Order 66 did nearly single-handedly destroy the Order of the Jedi. And then there's that whole business about Darth Vader attacking younglings at the Jedi Temple... okay. Yeah. The Empire was totally just as evil as everyone made them out to be, but hey, at least they make a mean pair of underwear!

These Star Wars-themed Crazy Boxers are a comfortable option for anyone who wants to add a little Galactic Empire style to their wardrobe!

These Darth Vader Stormtrooper Boxer Briefs are a pair of box briefs made out of a polyester and elastane blend, to give you underwear that's snug. The wide band in the waist is elastic, but it also has a soft exterior for comfort. The front of the boxer briefs have a printed image of Darth Vader and Stormtroopers, so you'll feel like you have the protection of the Empire when you head out on your daily business while wearing these.