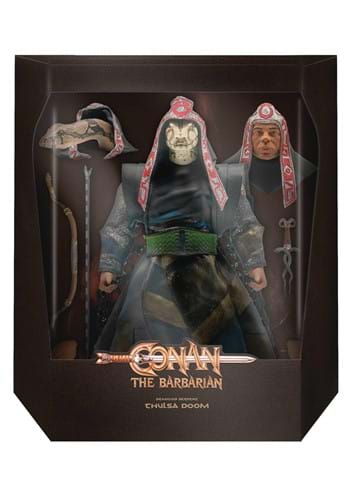 Now They Will Learn Why They Fear the Night

When it comes to villains, few are more intimidating than Thulsa Doom. Not content with owning a cache of steel to answer the Riddle of Steel, he looked to other methods to gain power. He created a cult, where he was a near-all-powerful being. His followers would give their very lives to him. Also... he could transform into a snake for some reason!

He proved to be the greatest foe that Conan the Barbarian faced during his younger years and now, he can become the greatest adversary to join your collection.

This Conan the Barbarian Snake Priest Thulsa Doom Action Figure has striking realism inspired by James Earl Jones' portrayal of the character. The figure is made out of molded plastic and is highly articulated, so you can pose him in many different poses. He comes with various accessories, including a bow and snake arrow, and the snake dagger from the movie. He also comes with multiple heads, including two different serpent heads. The figure stands around 7 inches tall, giving him an imposing presence among your action figures! Pair him up with Conan to relive the battle between the two characters from the movie.