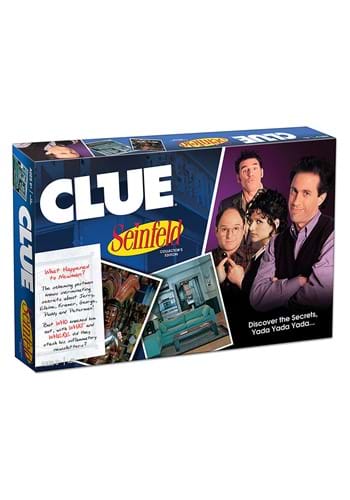 Jerry, Who Done it?

Newman has got some dirt. Really juicy gossip! That's just what happens when the mailman in your neighborhood has no scruples! He has got the goods on everyone in the gang, and he's ready to spill the beans. But, what's this? Someone has knocked the poor fellow out? Who could have possibly done such a nefarious deed? Well, it's up to Jerry Seinfeld and his friends to figure out who slugged Newman in the wacky and weird version of the classic board game, CLUE. Find the culprit first and that crafty Newman might just forget about the dirt he has on you!

This officially licensed Seinfeld Edition CLUE Board Game is a 90s spin on the iconic mystery-solving game. The game comes with everything you need to play the game, including a game board inspired by locations in Seinfeld and several game pieces. All of the weapons are based on items from episodes of Seinfeld. You get to play as 1 of 6 different characters from the show, including Jerry, George, Elaine, Kramer, Puddy, or Peterman. It's a great way for Seinfeld fans to enjoy the classic game during the next board game night.