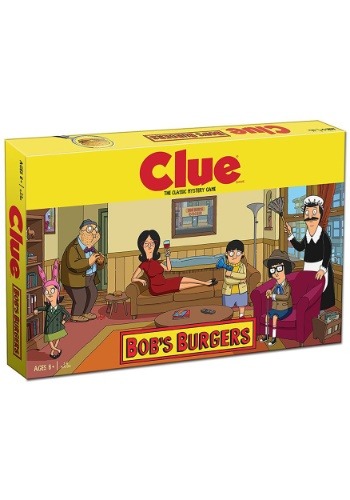 Murder with a side of Lies

Deceit is rampant in the Belcher household! It's up to the players of this game to figure out who killed Ned Bobby. Sure Ms. Scarlet (Linda) seems fine but she sure has been breaking out into a lot of threatening sounding Broadway numbers lately. Maybe she got sick of Ned commenting on her hogging the cheese plate! Then there's Mr. Green (aka: Louise). She's sure been on her best behavior. And why, exactly did she throw her precious Kuchi Kopi behind the coach right after poor Mr. Boddy was found?

Anyone who's played Clue in the past will pick up this game in a jiffy! The six subjects all have the classic names as an alias. While the murder weapons have changed to prized items from the Belcher family. We can just picture Linda holding a murder mystery party and with 2-6 players, you and yours can actually be a part of it!

Think you know who did away with Mr.  Ned Boddy? All we know is that something smells funny and it's not the Tunami burger that was on special today. It's up to you and yours to figure out who done it, with what, and where when you play this hilarious cartoon twist on the classic Clue game!