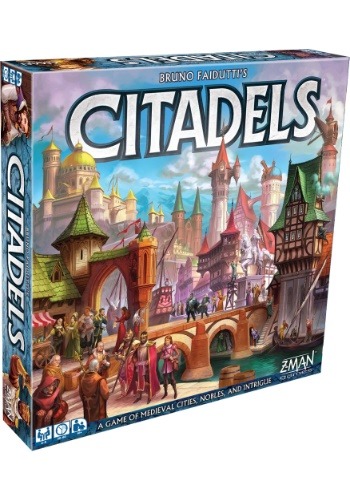 A Game of Citadels

The game of Citadels is a simple concept. At the beginning of each round, you just need to choose a role card from the hand of cards. Then, each player gets to perform the action of their role. The assassin removes another player from play during that round. The thief gets to steal gold from another player. The merchant gets to rake in some serious cash and the architect lets you build towards victory. The real strategy comes in trying to predict your opponents plays and sabotage their plans before they can craft a path to victory!

This game set comes with everything you need to get your game of sneaky subterfuge underway! It comes with the role cards, a bag full of fake gold coins, and various building cards. It also comes with a crown token. Since the gameplay actions are quite easy, this game is great for board game beginners. Of course, the more you play, the better you will become at reading your opponents’ tells, allowing you to become a master of strategy!

Greatness at All Costs

If you’re ready to backstab and scheme your way to the top, then Citadels may just be the board game that will revitalize your game nights!