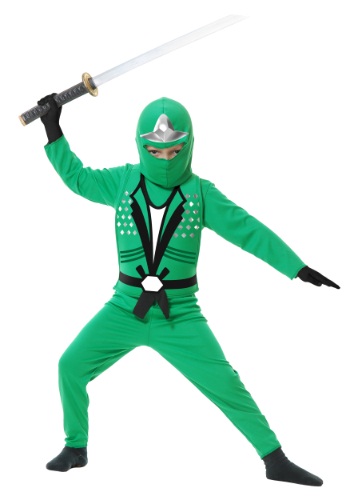 Your kiddo has been training and training over the past few months for…something. They’ve been pretty secretive about it, and that’s especially strange because they don’t usually keep secrets from you. All you can figure out is that they’re training late at night and in the dark shadows. They have a long stick they’re using like a sword and they spend so much time just…watching, waiting for the perfect time to move and reveal themselves. They may not answer any questions about the (seeming) ninja activities they’re up to, but if you get them this Child Ninja Avenger Series II Green Costume, you might have a chance getting some kind of reveal out of them.

We’re not saying you need to bribe them, but ninjas are known for exchanging information for things they need. So your kiddo may be willing to let a few things slip to get this fearsome outfit from you. They might even tell you a little bit about the ninja wars that are erupting all over the neighborhood…in secret.

And why wouldn’t they? This look is powerful, built for stealth and quick strikes, flexible enough for movement and comfortable enough to engage in hand-to-hand combat, should the need arise. The matching green shirt and pants are paired with a polyfoam green vest with printed on details and an attached belt that ties around the waist. A matching green hood is also included and features a silver patch above the eye hole. It’s such a great ninja look, your kiddo might even reveal their secret ninja hideout!

Under the Cover of Night

Just make sure your kiddo doesn’t get too involved with the secret ninja wars of the neighborhood. Although, maybe in this look, they’ll be able to finally put an end to all those battles! Because as any great ninja knows: peace is always preferable to fighting.