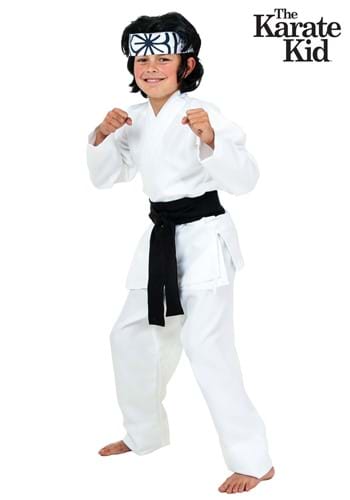 With all the remakes of the Karate Kid out there, you would think that there would be enough interest to warrant a parody movie of some kind. From Yoga Kid to Skiing Kid, the movies nearly write themselves! Our favorite option for the modern young adult audience is definitely the Videogame Kid.

Young Daniel wants to get better at Fortnite so that he can defeat the bullies at school who make fu of him for being really bad at it. He works with an old man who cut his teeth on Pong and Tetris, eventually learning that there is more to gaming than just hitting the right buttons. Finally, on the day of the championships, he figures out that the car waxing motion that he has been practicing is the perfect way to dodge the enemies’ shots, allowing him to overcome! What an inspiring story.

Even if you are looking to cosplay the original Karate Kid rather than the Videogame Kid, this Child Daniel San Costume is perfect for you! This “Made By Us” costume was made by our hard working and careful artisans, so you will feel good about wearing this for years to come. The wrap tunic and pants make the black belt stand out starkly for a very impressive and intimidating figure. The headband with its lotus flower design adds that final movie-accurate touch that will mark you out as a true fan of The Karate Kid.

If you are looking for the perfect Daniel San costume for your child, then you are in the right place! There is no better way to defeat all the Cobra Kai out there than to wear this awesome costume.