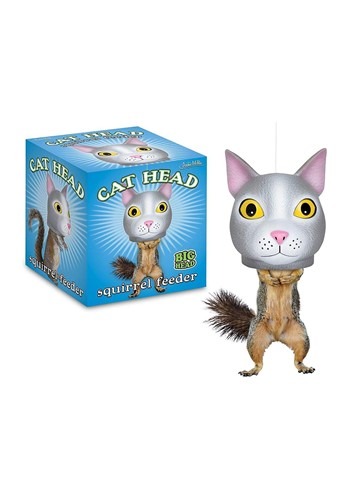 Those squirrels in our backyard think they're SO clever. There's one in particular that gives us trouble. We call him, Jerry. Why? Because he looks like a Jerry. Anyways, he races around the yard, scurrying his way into the bird feeder, and then he gives us this smug look after he's eaten all of the birdseed, like he really thinks he pulled one over on us. Meanwhile, the poor songbirds in our backyard have been denied their dinner! Well, we got tired of his shenanigans. That's why we decided to play a little prank on Jerry.

We set up this Cat Head Squirrel Feeder in the backyard. We knew Jerry wouldn't be able to resist. Like clockwork, the furry little trouble-maker scampered into the backyard and started gobbling up all of the food. But here's the catch. When squirrels eat out of this feeder, it looks like they have a cat's head instead of a squirrel head! When Jerry started eating, we took tons of pictures of him with his head inside of the feeder. He looked like a total goober! Now, we just have to figure out how to send these incriminating pics of Jerry to all of his squirrel friends...

This Cat Head Squirrel Feeder is pretty simple. It's shaped like a cat's head. You put some tasty squirrel treats inside. When they come to eat the food, they'll look silly! It's perfect for anyone who wants to see squirrels make complete fools out of themselves!