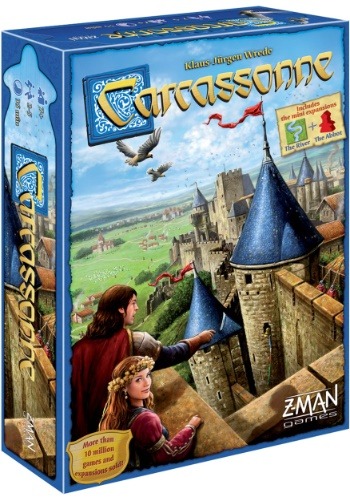 Take in the Countryside

Can you imagine it? Traversing across the French countryside during the Renaissance! Oh, the castles and towns that you would witness! Just imagine all of the roads and cathedrals that you would see along the way! Just think of all the massive points you could score…

Okay, so perhaps we’ve been playing a bit too much Carcassonne. It’s the tile placing game that lets you and your friends construct the French countryside, including sprawling roads and bustling towns. Each tile strategically placed could lead you to some serious points!

This Carcassonne game set comes with everything you need to start playing the award-winning game. It comes with 72 terrain tiles. Tiles depict roads, portions of cites, fields, and more. Players take turns placing tiles to expand the countryside, while also placing meeples to claim terrain. When you complete roads or cities with your tile, you score points! The game plays 2 to 5 players and takes between 30 minutes to 90 minutes to complete a game.

The New Star of Game Night

If you’ve yet to discover the incredibly simple to play, incredibly strategic game, then now might just be the time! It’s an easy addition to your game night arsenal and