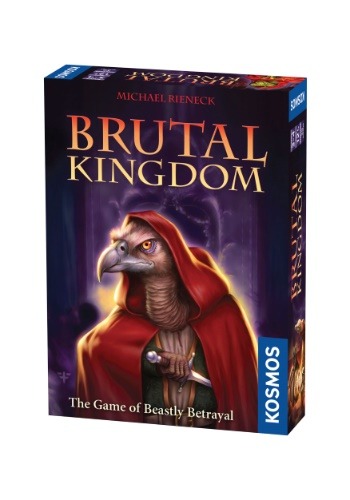 LIFE IN THE ANIMAL KINGDOM

We've always basically known that the world of animals can be pretty rough. Prey and hunter, kill or be killed. But, when you add the complications of courtly influence and mystical intrigue, well, it gets downright brutal.

Time to find out just how crazy life can be in Brutal Kingdom. In this game of 3-4 players, you'll each pass lovely designed cards between each other in a series of four rounds. Each card is decorated with animals who hold a particular station in the kingdom, including the King, Queen, Witch, White Knight, Abbot, Saint, and such. Many of the cards have special powers that allow you to look at other cards or move things around. Several gain you one of three types of influence in the kingdom, whether royal, clerical, or mystical. Have the most influence and you'll win the game! But, make sure that it is a kind of influence the kingdom still needs or you may have wasted your energy. Worse yet, these animals hardly get along. Watch out for assassins and other such trouble-makers or you'll watch that influence slip through your fingers. Don't worry, though; with a 30-minute game, you'll have plenty of chances for revenge!

Take a few adorable forest animals and give them the mighty power of witchcraft and royal command and you'll be instantly in the world of Brutal Kingdom. Now to make sure that you are the one who is really in charge around here!