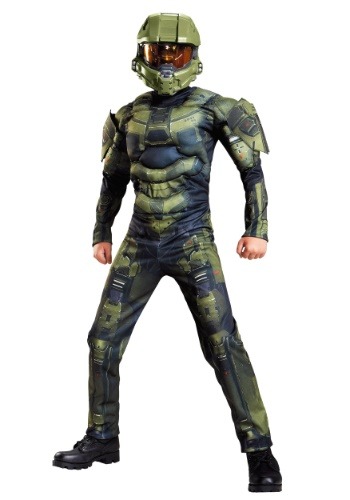 So a simple superhero isn't good enough for your kid, eh? What with those silly capes and tights, and those cheesy one-liners? Well we don't blame them. Because as heroes go, sometimes "superheros" are a bit ridiculous.

But a non-superhero? Those guys are pretty cool. Without some crazy magical abilities or mutant gene, they have to save the world by themselves. That's right, no help from radioactive spider bites or dangerous radiation. Everything they accomplish is because of their own skill, speed, and smarts. That's pretty admirable.

Take Master Chief for instance. This guy is a super military soldier that saves the galaxy. Sure, he does have a bit of an edge on strength and speed, but he's better than the rest of the Spartans out there because he's stubborn and smart, not because he has some kind of superhero edge.

As a matter of fact, Master Chief is one of our favorite heroes. Of all time. He's got that awesome armor, he's fast and agile, he's cheeky, and he's selfless. Did we mention lucky? Cause he's that too. It would be no surprise to us then, if your kid is equally as impressed by Master Chief. Maybe they like him so much they have all the games, the books, and the action figures? Well then, the next logical step is dressing up as him of course! Your kid can do so with our Master Chief Classic Muscle Costume. This costume comes with a jumpsuit printed to look like Master Chief's own armor. The jumpsuit is padded in the chest and shoulders to give the appearance of extra muscles. It also comes with a molded plastic mask to look like Sierra 117's. This way your kid can dress up like an actual hero (and not one of those flying good-two-shoes in tights).