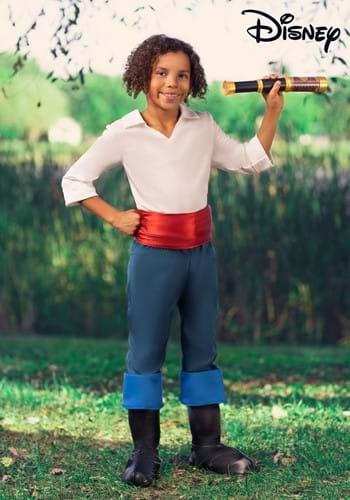 When it comes to fairytale love stories, princes and princesses often fall into certain stereotypes. While the prince goes on an epic quest, the princess waits around for the prince to find and save her. Although Disney’s Prince Eric isn't afraid of a little adventure, he's also a romantic at heart. He's waiting to find the right girl, and he's convinced that when he does, it will hit him like a bolt of lightning! Of course, Eric and Ariel's love story turns out to be a little more complicated than that. If your little one wants an adventure on the high seas, but also wants to fall in love with just the right person, then it sounds like they have a lot in common with this romantic royal!

Your child is sure to feel in character when they put on this officially licensed Disney Prince Eric Costume! It's designed to imitate Eric's signature look from Disney's The Little Mermaid. The white shirt, with its v-cut neckline and cuffed elbow-length sleeves, is anything but plain. Next is the pair of blue pants that look like they came right from Eric's sailor outfit. Black foam-backed boot covers turn any pair of footwear into swashbuckling shoes, and a shiny red satin sash adds the finishing touch! Your kiddo will be ready to battle the sea witch and save their true love when they put on this delightful costume!