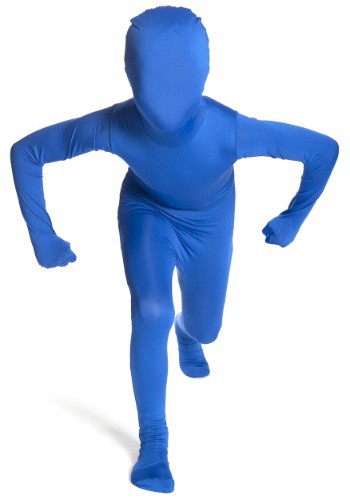 Your kiddo is about as unique as they get, so he needs a Halloween costume that expresses that. He doesn’t want to be just another creature of the night lurking the streets and there will already be plenty of iterations of well-known superheroes flying around the block. So we suppose he’ll have to become something of his own creation and we’d love to help him get a jumpstart. Check out this Child Blue Morphsuit! It will be the perfect beginning to bluetiful costume.

Will your youngster be a new superhero the world has yet to see in action? His powers could be based around water control. Maybe he is some sort of alien with a blue complexion. Will he teach us about his ancient alien technology? He could also be an understudy for the famous group known as the Blue Man Group. Will he get us tickets to their next show in Las Vegas? We can only find out if you grab him this Blue Morphsuit for Halloween. Let this costume be the canvas and your little one’s imagination will create a character that only he can perfectly portray.

This costume fastens with a 2-way zipper at the center back of this full-body suit. Your child’s head, hands, and feet will be fully enclosed once the costume is zipped up. The hood can be unzipped and pulled down for eating and unobstructed vision. (The hood WILL obstruct one’s vision, so be aware and careful!)

Your youngster may be blue this Halloween but he won’t be feeling the blues, that’s for sure. With this zentai, he’ll be the happiest kid on the block. Take him trick or treating with Eifel 65’s hit song “I’m Blue” rocking out of a boom box and you can bet that you’ll give your neighborhood a Halloween experience they’ll never forget!