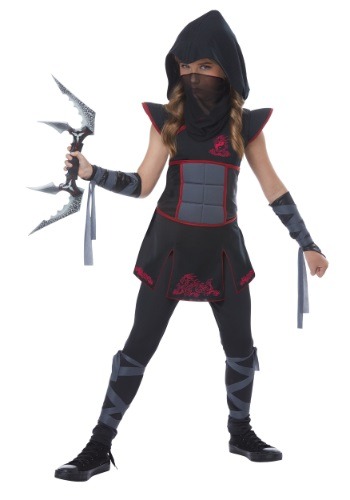 NINJAS: THE MOST DANGEROUS FORCE ON THE PLANET?

Ninjas are some of the most dangerous people on the planet. Their stealth and fighting ability are seemingly unmatched, and their discipline and cunning are some of the greatest in the world. To be honest, we can't think of anyone or anything that a ninja couldn't handle.

You're probably thinking "Well that seems a little bit unrealistic, a ninja probably couldn't fight off a stampede of rhinos." (Did we guess right? 99% of you probably weren't thinking that, but the 1% that was thinking that is totally freaking out right now.) Anyways, back to our matchup. We think that a ninja would make quick work of a stampede of rhinos by splitting up the rhinos, and then getting them to smash into each other! Don't think about it too much, in our heads it works perfectly!

This costume comes with everything you need to become a fearsome ninja! The costume comes with a tunic with a hood, complete with stitched in armor, and red dragons for added flair. This costume also comes with a mask to cover half of your face, which is made of a comfortable and breathable mesh. Another cool piece of this costume are the gauntlets! The gauntlets cover the forearms and come to a point on the back of your hand. The finishing touch for this costume is the tie-on arm and leg bands, which will flow in the breeze as you sneak through the night. This costume will have you feeling like a force to be reckoned with.

What will you do when you become a ninja? We recommend you start small, until you have your ninja stealth all figured out. Maybe you could start by sneaking into the kitchen, and grabbing some cookies? Just don't let anyone catch you! This would make for an excellent training exercise. Good luck!