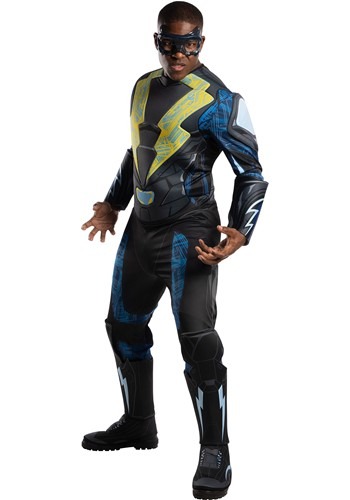 Jefferson Pierce has a lot on his plate. He's the father of two daughters, trying to raise them in a modern world. And one of whom can be a real handful all by herself. He's also holding down a stressful job as Principal of Garfield High School, trying to teach the kids the importance of education. If that wasn't enough, he's also been forced back into the superhero game as Black Lightning, since the bad guys just don't want to give him a break. It's all good though. He's got years of experience dealing with villains, expert-level combat skills, and he can shoot lightning out of his hands! Oh, and did we mention that he does it all while wearing an awesome superhero uniform? Yeah, he does.

If you're good at juggling a lot on your plate, just like Jefferson Pierce, then maybe it's time you jumped into the superhero game with this Black Lightning Deluxe Costume for Adults.

This Black Lightning Costume is officially licensed from DC and does a great job of recreating Jefferson Pierce's iconic crime-fighting gear from the television series. It comes with a full jumpsuit that has plenty of printed details on the exterior, including armor details, yellow lightning bolts on the front and printed muscles. The boot tops fit over any pair of shoes, so you can wear your favorite pair of kicks with this superhero outfit. Finally, the costume comes with a black eye mask, which fits with a simple elastic band around the back.

Add Superhero to Your Resume

When you're ready to add "superhero" to your resume, then it's time to get this Black Lightning Deluxe Costume. It comes with everything you need (aside from awesome lightning powers, of course) to become the iconic DC character from the television series.