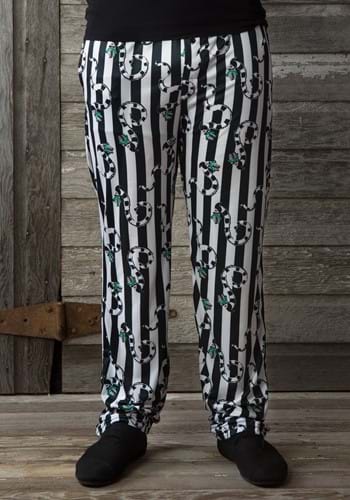 Beetlejuice Sleep Pants All Over Print

Ah, Beetlejuice, that tricksy, mischievous ghost. That rude, crude, crazy womanizer! That unpleasant, selfish, space-invading, insect-eating, reality-warping, voice-mimicking, shapeshifting prankster! Need we go on? You know the guy. That one whose name you definitely shouldn't say three times in a row, like we just did -- oh no, here he comes...

Alright, false alarm. We thought we conjured him, but we really just conjured his pants. And they're kind of cool! These Beetlejuice All Over Print Sleep Pants are sure to conjure up the inner prankster inside you, but without all that nasty other stuff. You don't want to lose friends over a character, anyways. The super soft pants have an elastic waist with a drawstring, so when you fill up on moths and grubs, you'll still be comfortable. Pockets are on each hip so you can carry around more moths and grubs for later, as a snack. And they're machine-washable, which is convenient considering how filthy moths and grubs are! Best of all, these bad boys are officially licensed (like an endorsement by Tim Burton himself), so you can worry less about the quality of those sweet stripes and more about where you'll set the limits of your own mischief.