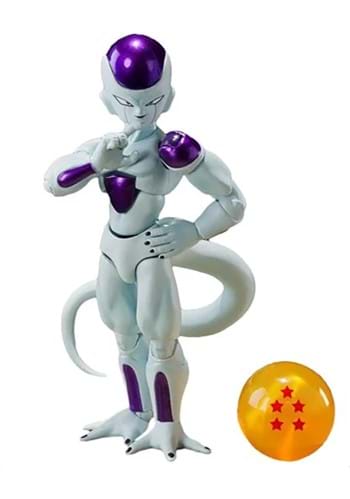 When Dragon Ball Z first revealed Frieza, we were a little surprised. Vegeta seemed like such a force to be reckoned with that it seemed odd that he'd be afraid of the twerpy-looking Frieza that appeared on Namek. Of course, his powers were quickly proven and each of his new and improved forms was more frightening than the last. His final form was sleek, efficient, and ready to kick some Saiyan butt! Now, you can bring the final form version of the Akira Toriyama character to your collection when you get this Bandai Spirits S.H. Figuarts Dragon Ball Z Frieza Figure!

Inspired by the iconic villain, this toy figure recreates Frieza in all of his glory. The Dragon Ball Z figure has sculpted details and multiple points of articulation, so you can pose him in anime-accurate poses. The figure has shimmering, metallic purple accents that really stand out and he even comes with Dragon ball accessory! This figure is ready to command your collection with unparalleled authority!