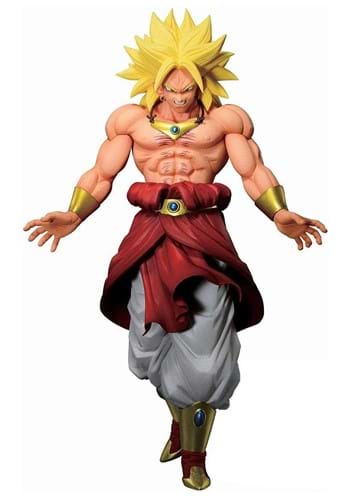 Are you ready to go toe-to-toe with the legendary Super Saiyan Broly from Dragon Ball Z?! Don't worry, nobody except the Z-fighters was prepared to handle this beast of a Saiyan. He was born on Planet Vegeta, the same as the rest of the Saiyans we are familiar with, on the same day as our main character Goku. In their cribs, Goku would drive Broly crazy with his constant crying. That, coupled with the destruction of his home planet, and the trauma of being an outcast, made him misdirect his anger at Goku and his family. As you can see, Broly has been through quite a bit, and that's saying a lot in an anime where planets can be blown up with a single superpowered ki-blast. If you want to help give Broly a little reprieve, you should pick up our Bandai Ichibansho Dragon Ball Z Broly Super Saiyan Statue. The molded vinyl statue is roughly 10 inches tall and features meticulously sculpted and painted details of Super Saiyan Broly. If you are a fan of the infamous DBZ villain, we know you will power up for our officially licensed Bandai Ichibansho Dragon Ball Z Broly Super Saiyan Statue.