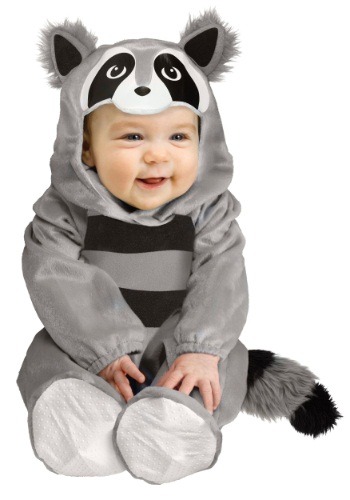 Raccoons are some of the cutest animals we have ever seen. We know that some people will consider this debatable because raccoons have a mixed reputation, but just look at them! Even if they are always climbing into people's trash, they're just too stinking cute! They could tip our trash over every night of the week if it means we get to watch them dig for goodies every night.

We think they'd make a fun pet. They do get a little aggressive as they get older, but until then they are just the sweetest little things! The babies will follow you everywhere and climb up your legs, and watching them pick stuff up with their little raccoon hands is just too much. It's absolutely adorable. Yeah, people love their cats and dogs as pets, but you can mark us down as raccoon people.

This costume will turn your little baby into the cutest raccoon you have ever seen! They'll be we wearing a gray jumpsuit with black stripes on the torso and a fluffy little black and gray tail on the back. The feet are enclosed in little booties that come attached to the jumpsuit, and their hands will be uncovered so they can use them! All of this is great, but the hood is what really sells this costume as a raccoon. The hood has ears, eyes, and a nose on it, complete with the coloring of a raccoon's face, making this costume instantly recognizable.

If your little one has been learning to get around on their own, you are going to need to keep a very close eye on them while they are in costume. While they are dressed like a raccoon they are going to be constantly trying to get into the trash! We know it sounds silly but it's true. You'll see!