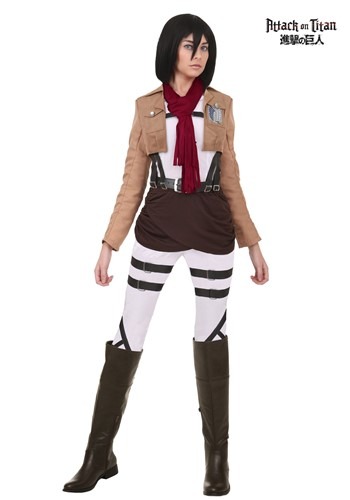 Sure, on the surface Attack on Titan may seem like just another story about people having to fight evil gigantic Titan monsters who want to eat their townspeople and destroy their lives. Yawn. And that Mikasa could seem like just any other ordinary, sullen, cynical teenager.

But anyone who’s seen the show knows that it’s actually a complex emotional journey and Mikasa is far from ordinary. And while her storyline does follow that of traditional hero tales (her parents were killed in front of her and she was taken in by an adoptive family), she pretty much turns into the best female character of all time. Actually, strike that--the best character of all time. Now, in this Attack on Titan Mikasa Costume you can lead the forces, outsmart and outperform the boys (and a few Titans along the way, too), and fight valiantly--and with a lot of heart--to save your people. Pretty cool, eh? Not bad for day’s work.

One thing is for sure, when you put on this long-sleeved blouse and these slim-fitting pants, you will begin to feel the power of Mikasa coursing through you. The faux leather straps look like Mikasa’s harness, and the cropped jacket will tell everyone you meet that you’re part of the survey corps. This look even comes with Mikasa’s scarf and boot toppers, because we know that with everything that’s been going on inside of the walls, you probably don’t have a lot of time to shop for accessories. Team up with Eren and Armin for a fierce group costume, but be on the lookout all night. A true hero never fully rests, and you are the greatest hero of our time.