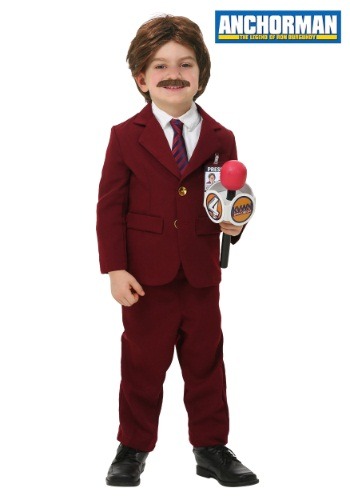 When you ask your little one, "What's the news?", what does he say? Are you apt to get updates on the latest drama between Batman and Dino? Maybe you'd hear about what his imaginary friend was up to recently or what he had for lunch. No matter what, he's probably a bit better at telling the news on the fly than poor old Ron Burgundy.

Don't get us wrong, we think Ron has a lot going for him. He's got the cutest scruffy dog on the planet, a mustache most men could only dream of, and skills with a jazz flute that could make Louis Armstrong pack up his trumpet and retire. But, he's not great with improve. No, Ron needs his news prompt or there's sure to be dead air. . . or worse. He might say something that makes him exclaim, "Odin's Raven!". Your little one doesn't seem to have that problem. He can jabber on all day. And really, you never know where the conversation will turn so it's all news to you. Now, if only he could make the Evening News team back off, those guys are ruthless.

This costume has everything your classy kid needs for his budding news anchor career. He's sure to excel at telling San Franciso what his Teddy Bear ate for breakfast or how far his favorite action hero can jump. He'll be set with a burgundy suit, clip-on tie, a wig, mustache, and press badge. All he needs now is to remember his tagline, "Stay classy, San Francisco".