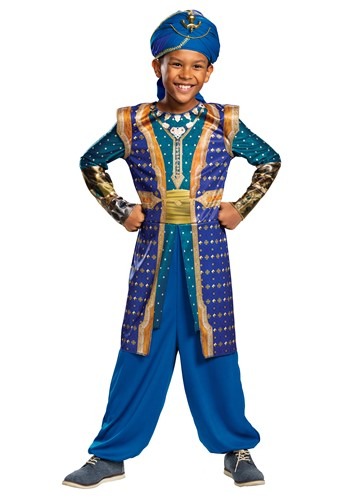 In all of your ten thousand years of service, you've never met a human more in need of help than this guy. Homeboy Aladdin may be a diamond in the rough, but he has no idea how to win over his princess. His current wardrobe says "flea-infested street rat" more than it says "super-eligible suitor," he doesn't have any assets other than a gift for stealing, and he tends to babble about jams and jellies when he gets nervous (don't ask.) Fortunately, with one rub of an antique lamp, he's won himself a friend unlike any he's ever had before in his life. This genie is about to make some magic!

Can your friends do THIS? *Wears an awesome Live ACtion Boys Aladdin Genie Costume* We didn't think so! The officially licensed outfit drops you straight into Agrabah, a far-off land where a genie might still live inside a tarnished old lamp. The one-piece jumpsuit is designed to look like an elaborate shirt and sleeveless vest over a pair of harem pants. Gorgeous printed patterns in shades of blue, teal, white, gold, and orange decorate the top, while the sleeves have graphics of golden arm bands set with precious gems. The solid blue pants evoke the Genie's formless blue smoke as he bursts out of his "itty-bitty living space." The turban-style headpiece is embellished with gold-tone beads and rickrack.

Slip into a classic retold fairy tale with this spectacular outfit! Just wearing it will make you feel as though you've had your wishes granted.