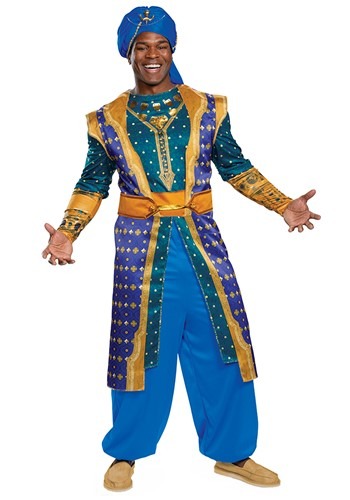 Genie is the kind of friend you want. Why don't you ruminate while and whilst we illuminate the possibilities! First of all, he seems like a pretty jovial character. He's always ready with some friendly advice or a little emotional support. Second, that guy can sing. He's ready to sing you a song when you're feeling a little down. Also, he always hangs out next to his lamp, so you always know where he's at when you need his help. Finally, did we mention all of the magical powers? Yeah, Genie has a ton of those! You see, he's basically an all-powerful being that can do pretty much anything he wants! Time travel, flight, poofing things into existence with a snap of his fingers—he can really do it all. That means all you need to do is ask, and he'll grant you up to 3 wishes!

Do you want to become the best friend on the entire planet? Well, then this Aladdin Live Action Genie Costume will have you looking like the character from the Disney film!

The officially licensed Genie costume comes with everything you need to become the iconic character (aside from djinn-like powers, of course). The jumpsuit is designed to look like a regal robe and comes in a royal blue color, with plenty of gold accents. Finally, the headpiece fits atop your head to complete the look. It looks like a turban headwrap and even comes with gold accent pieces to give it a magical appearance.

Some Power in Your Corner

Well, Ali Baba had them 40 thieves. Scheherazad-ie had a thousand tales. But, you're in luck, cause up your sleeves, you'll have a brand of magic that never fails! You'll have the power of this Genie Costume from Aladdin!