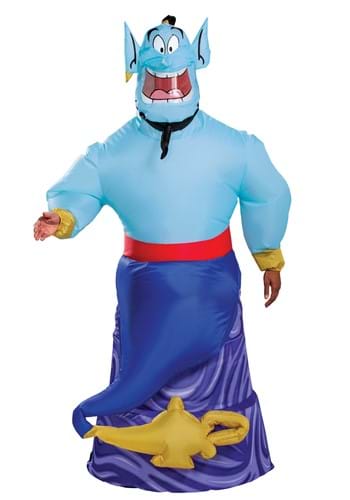 Wow! Ten thousand years can give you such a crick in the neck! Don't worry about missing out on anything while you were cramped in your itty-bitty living space. As Genie, you have PHENOMENAL COSMIC POWERS, plus the ability to do comedic impersonations of pop culture characters - including the ones that won't even be heard of in Agrabah for another few millenia. That bedraggled street rat who freed you will learn very soon that there are few things you can't do for him (other than make someone fall in love with him or come back from the dead, but you know...details). He'll discover that making someone a prince is as easy as 1-2-3 for you, and that he's gained a loyal and hilarious friend!

There might be an ix-nay on wishing for more wishes, but once you set eyes on this officially licensed Aladdin Genie Inflatable Costume for Adults, you'll feel like you have nothing else to wish for! The heavy-duty polyester windbreaker bodysuit zips up the back to cover your entire body and has a battery-powered fan mounted behind the right hip so that you don't suddenly deflate. It's designed to look just like the Genie rising out of his golden lamp, and the head has a clear plastic viewing port inside his smiling mouth so that you can see where you're floating.

Poof! What Do You Want?

Grant your friends' wishes by showing up to their parties in this awesome costume. If you see anyone dressed as a tall, dark and sinister ugly man with a parrot on his shoulder, definitely avoid!