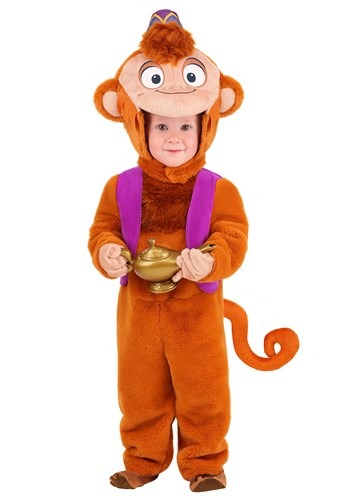 Every Disney character worth their salt has an animal sidekick. Sometimes they've got two. But while they're all nice, not all animal sidekicks are equally heroic. Some have words of wisdom. Others provide laughs or a distraction when the hero is in a tight spot. But what sidekick is the best out of all the films?

Now, Abu might not be able to speak but most people know that he is one of the best sidekicks a Disney character could ask for. He's Aladdin's right-hand man, stealings melons, charming citizens, and defending Aladdin's pride. Yes, he disturbed the ruby in the Cave of Wonders, causing the mystical entrance to collapse but he also saved Alladin's life by his more than once. Aladdin simply wouldn't have made it without his hairball associate! Think your little one is up to the task of becoming head monkey? This costume will let them take on the role, no genie needed!

Helping your kiddo transform into the mischevious and adorable is easy with this licensed costume from Aladdin! The costume is made of soft faux fur and secures up the back with hook and loop fasteners to ensure changing is easy. Along with a tail attached to the back, the look is made official with a sculpted headpiece, The attached face has curious eyes and ears. Made with a soft material that's loose enough to wear clothing underneath, this costume is a great choice for a chilly Halloween night!

A Cast of Characters

Are you planning the ultimate family costume? Now that you've got your Abu down, check out the rest of our costumes. From Jasmine costumes of all sizes to Aladdin and even Jafar, you'll easily find the characters that your family knows and loves. Now, whether you can keep Abu from stealing all the loot on Halloween night, that's up to you!