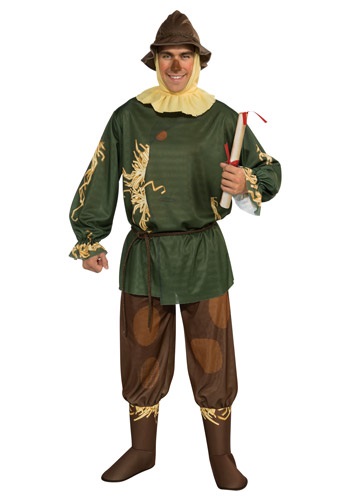 As a scarecrow, people always made fun your wit, or lack thereof. “You’re just not brainy,” they always said, “You’re just missing a brain,” they joked. Well guess what? You're just back from a huge adventure with your friends—and you defeated an evil witch and discovered the secret of the mystical Wizard himself—and as it turns out, you do have a brain, and a pretty good one actually! You even have the college diploma to prove it. So throw on this fancy new Scarecrow Adult Costume, grab your rolled up diploma (naturally), and show everyone how smart you are!

This academic-outdoorsy look will show off just how hard you’ve worked over the last four years at Oz University...and hey, it’s a tough school, not everybody can get in there—much less graduate—so you have a lot to be proud of!

This is a...fancy...new graduate outfit to go along with your diploma. The green shirt secures in the back and has elastic at the wrists. The brown pants have attached foam boot tops, and both the pants and the shirt have straw accents, printed patches, or fabric tears (so you don’t forget the cornfield where you came from). Also included is a brown braided cord belt, a neck band on a yellow flannel hood, and a brown flannel hat! Don’t forget the most important thing—the paper diploma rolled up in red ribbon! Someday, you’re going to want to hang that on the wall of your house. But for now, carry it around and be proud. You've earned it!

Whatever you decide to do with your Oz U. education now is up to you. You can get a job in the city, or work with the people in the rural farms. Just don’t ever let anyone call you brainless again!