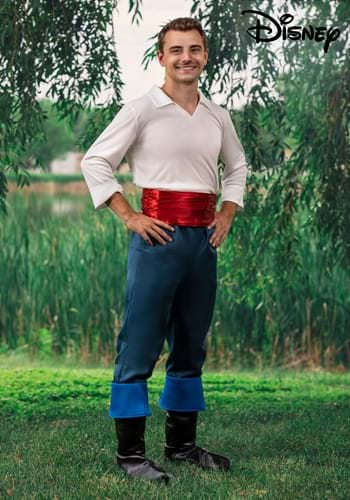 You wanted to be a pirate for Halloween. But your partner decided you needed to be a royal, so you’d match them in their costume. Not wanting to rock the boat, you agreed. Luckily, your partner then revealed they wanted to be merfolk, specifically Disney’s Ariel. And as far as you’re concerned Prince Eric is about as close to a pirate as a prince can be!

Prince Eric lives to sail. But not only is he an expert mariner, he works alongside the crew. When storms threaten the ship, he leaps into action. Instead of choosing a “suitable” partner through dancing at a royal ball, Prince Eric falls for an ancient mariner myth, but not just for her pretty face. And to cap it all off, his romance is solidified in marriage on a boat. You can’t get much more pirate-prince!

Grant your pirate costume wish in princely disguise when you order this exclusive Disney Prince Eric Costume from Disney’s The Little Mermaid! Modeled after Prince Eric’s most recognizable outfit the officially licensed ensemble makes becoming the one-of-a-kind royal easier than raising anchor. Secure the jersey shirt with hook-and-loop fasteners along the back to get the clean yet relaxed look Prince Eric enjoys. Pull the cropped pants into place and secure the red sash around your middle to add polish to the full ensemble. Finally keep comfortable wherever your journey takes you, by turning your favorite casual footwear into a sturdy pair of heeled boots with the included black shoe covers.