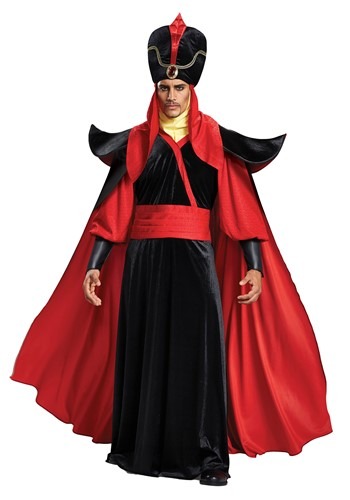 Plus Size Jafar Costume for Adults

You're Only a Fool if You Give Up

Ugh, being Royal Vizier to that silly sultan is so annoying! Even though you're the power behind the throne, thanks to your knowledge of the dark arts, you'd much rather rule Agrabah for real without the nitwit sultan or his too-clever daughter. Time to seek out a mystical talking cave that holds an ancient treasure within its lion jaws...what? You aren't allowed to enter? Only the Diamond in the Rough can take the lamp? Ha! No setback can stop the mighty Jafar!....unless the setback is turning into a genie and being stuffed into your own magical lamp. Curse that street rat Aladdin!

Be the grandest, most stylish Disney villain in history when you wear this officially licensed Plus Size Jafar Costume for Adults! The floor-length black robe looks just right for a sinister sorcerer type such as yourself. The mock-wrap red pleated cummerbund is sewn in place so that you'll never have to adjust it while you're disguised as an old, murderous beggar. The red-lined black cape has a dramatic peaked collar (excellent for perching parrots!) and billows impressively after you as you stride through the sultan's palace with your snake staff in hand. The high black turban is decorated with a huge plastic jewel.

Patience, Iago! Someone will surely come along to let us out of this lamp. In the meantime, we'd better get used to being very cozy together for a millenium or two. Do you know any good card games?