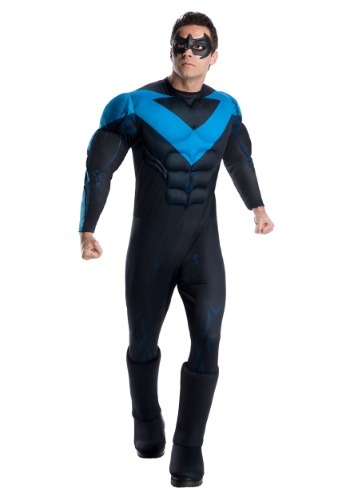 Not Just a Sidekick

People often think of Dick Grayson as just a sidekick. But they'd be wrong. Dick Grayson has long since left the shadow of Batman. He took up the mantle of Nightwing to distance himself from his days in Gotham. He successfully defeated a whole slew of villains that were residing in Bludhaven. He's even led his own team of superheroes, the Teen Titans, against some of the greatest threats the world has ever seen. He's anything but a sidekick!

Now, you can establish yourself as a tried and true hero when you dress up in this Adult Deluxe Nightwing Costume! It's inspired by his iconic costume from the comic books. No one will mistake you as just Batman's sidekick, that's for sure!

This costume is easy to slip into, since the main piece is a full-body jumpsuit that fits with a fastener in the back. No time for sculpting that superhero physique? No problem! This jumpsuit has fiberfill padding and formed muscles on the chest and shoulders to help give you that buff and tough look that Dick Grayson has been honing for years. The front of the suit has a bright blue "V" shape in the center, to recreate his Nightwing symbol. The legs end in foam boot covers, which are designed to fit over most pairs of shoes. They even have elastic bands on the bottom that help secure them on your feet while you're fighting crime. Finally, you need to protect your secret identity, which is why this costume comes with a simple face mask. The mask fits with an elastic band, so one size fits most adults. Put it all together and you have a look that will make even Batman jealous! Just make sure you pack a few of gadgets along for the ride because Dick Grayson always has some fancy tools at his disposal!