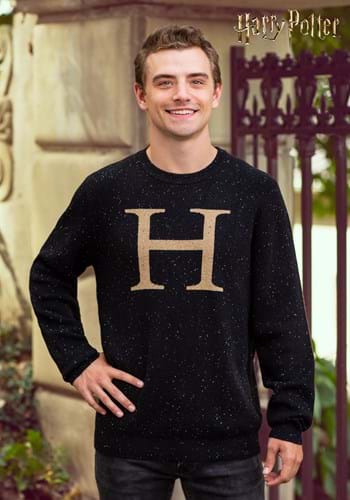 Home For the Holidays

Christmas at the Dursleys was never holly. Nor was it jolly. In fact, for Harry, it was an extra depressing day in an already dark and dismal time of year. So when Harry Potter spent his first Christmas in the halls of Hogwarts, it was even more magical than a wizard could imagine. The magic feeling wasn't conjured by the hovering candles in the dining hall. It wasn't even stirred up by the amazing feast appearing on the dining hall tables. Nope. The true magic of Christmas was kindled when Harry opened Mrs. Weasley's Christmas gift and received his very own jumper. There's nothing like knowing a thoughtful Christmas gift to make you feel right at home in the holiday season!

For those of us who don't have magical knitting needles, this Harry Potter Christmas sweater is the next best thing to Mrs. Weasley's creations. The knit fabric will make you nice and cozy during the holiday season whether you're spending it in a drafty Scottish castle or while traveling home for the holidays. The black sweater features a bold "H" like the one Molly knit for Harry in his first year of Wizarding school. Officially licensed and available in a range of sizes, this sweater is sure to be a staple in your wardrobe. Snuggle into this look on Christmas Eve and enjoy the warm holiday magic throughout the New Year!