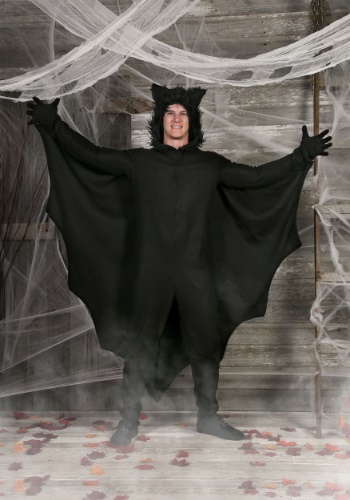 Being a bat would be pretty awesome. Everyone would be afraid of you because they can never tell if you are Count Dracula or just another regular bat. So even though you are harmless, people can never be too certain when they see you, and they'll always be just a little bit on edge! They'll be thinking "Oh man, I really hope that bat doesn't turn out to be Dracula, that is the only way this Monday could get any worse."

But how cool would it be to be Count Dracula? You'd get to fly around as a bat whenever you want to, and you'd have echolocation! You could fly through your castle, saving yourself a lot of time and energy on going up and down the stairs. And you wouldn't have to worry about bugs getting in your castle because you can just eat them when you're a bat! Wow, we have got it all figured out.

When you dress up in this bat costume, you'll look just like a bat, man! No, not batman, just a man in a bat costume. That could cause a lot of confusion. This bat costume comes in all black, just like a bat! It comes in the form a jumpsuit and has attached wings. The finishing touch for this costume is the hood you'll be wearing! The furry hood has two black bat ears on top, perfect for your echolocation you'll be using.

KEEP YOUR ARMS DOWN

While the wings on this costume aren't enough to make you start flying, they are enough to blow you over on a windy day! So if you're going to be outside in this costume, or even in front of a large fan, make sure you keep your hands at your sides! We'd hate to see you get blown away.