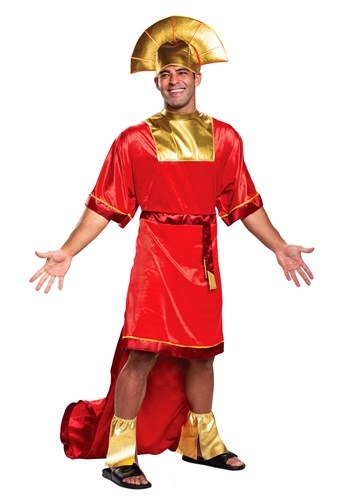 Being the Emperor is AMAAAAZING! You have a full-time butler! A full-time chef! A full-time Theme Song Guy whose only job is to sing about how incredible you are and provide the soundtrack to an epic dance number starring YOU! You have so much power that you can do whatever you want! Although, as it turns out, even when you can do whatever you want, your actions do have consequences. I.e., firing your evil advisor will make her try to poison you, but accidentally turn into a llama, at which point you'll need to work with the peasant who doesn't like you because you're turning his House on a Hill into a summer home *complete with water slide*.... Fortunately, these consequences turn out to be really good for you, because you'll learn that you can be a really nice guy and still have awesome dance parties.

No one will dare to throw off your groove when you're wearing this officially licensed Emperor's New Groove Kuzco Adult Costume! The short-sleeved red tunic is made of luxuriant polyester velvet and trimmed with shiny red faux leather at the hem and arm openings - truly fit for an emperor! The golden faux leather yoke adds a touch of grandeur, as do the golden shin gards that adorn your legs. The train that attaches to the back of the waist has wire in its edges so that you can curl it for extra swag. The matching crown shows everyone your true identity: the King of the World!

You'll look so awesome in this costume that you may have to lay down a few rules about who can get close to you. Just remember - being a good friend gets you more good times than having your own water slide.