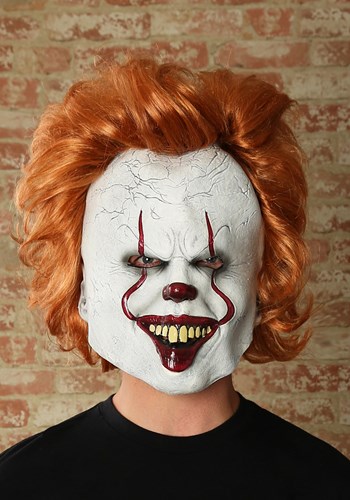 Does anyone remember a time when clowns were completely innocent and not there to frighten the wits out of adults and children alike? We're not sure they were ever around for a cheery reason. In fact, paleontologists recently found a primitive cave painting of a child crying and an adult figure with what looked like a red nose. They are pretty sure it represents the ancient child and clown dynamics.

While this anecdote is obviously made up we honestly believe that the fear of clowns is as timeless as the interdimensional entity that lurks in the sewers of Derry. It's something about caked-on white makeup paired with wild fake hair. We get that standups can't really stake out the parade circuit but there have to be other ways to get a laugh other than a painted on smile. Well, if you think about it, maybe a laugh isn't what clowns are out there to get!

You'll feel creepy in a superannuated way when you're rocking this Pennywise mask. It's straight from the 2017 remake. People will instantly recognize the red makeup that extends from the mouth to the eyebrow free eyes. The molded material forms an evil grin and extends to high above the natural hairline. It's framed with unnerving orange hair that stands out well in the dim light of the Derry sewer system. Pair it with one of our Pennywise costumes to make the nightmarish ensemble complete. You'll surely be a hit at Halloween parties, after all, you've got a clown's reputation to uphold!