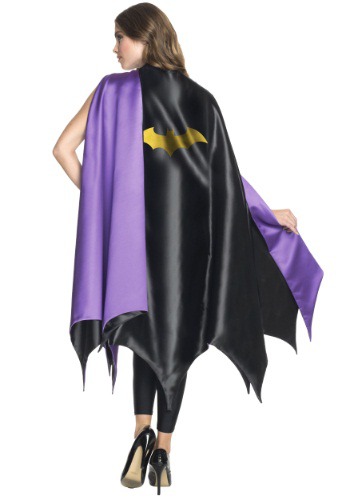 The city of Gotham has always had its secret dark spots amidst its otherwise shining potential.  Between the gleaming gem of Wayne Enterprises and… er… well, actually other than Wayne Enterprises, things are pretty darn gloomy!  On one street, you’ve got the Joker playing the sorts of practical jokes that usually end up in someone exploding and, on the other side, there’s the Scarecrow convincing everyone that their worst fears are a total reality.  And, all that stands between the two are the power house Dark Knights that protect the citizens!  Of course, Batman and his all black color scheme isn’t exactly adding much optimism to the streets.

Fortunately for the rest of us, we have Batgirl out there ready to give us that much needed splash of color.  You can bring out the perfect combination of purple, yellow, and rich black with this officially licensed Deluxe Batgirl Cape.  Its dark shell and purple lining will show those villains exactly where they can go while still looking trendy and unique compared to that tired old black routine!