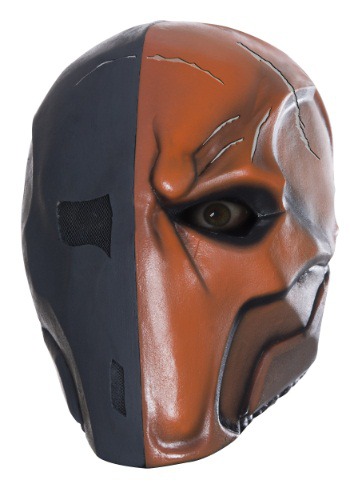 Archenemy. That's a pretty epic title. There are plenty of adversaries out there but only one can have the title of the archenemy. Deathstroke earned this intense appellation through hard work, determination, and getting experimented on by the military. Well, to be honest, he mostly earned it by getting that experimental serum!

Now, Deathstroke might feel a little self-conscious about the loss of one of his eyes but that doesn't mean he's any less talented than when he was experimenting with Guerilla warfare before heading to Vietnam or taking contracts for assassinations before his son was kidnapped. In fact, he's more motivated to prove his worth than ever!

You'll be ready to take down those bothersome Teen Titans once and for all when you put on this hardcore red and black mask. One side is detailed with a three-dimensional latex mold forming the red side and a smooth, black surface with a mesh-covered eye hole on the other. We'll leave it up to you to live up to the archenemy name!